The Outer Hebrides is an island world like no other, with more than 200 of them stretching 130 miles. This epic 10-night itinerary aboard Glen Shiel will take you to the white sandy beaches that frame the very edge of Western Europe. After a quick stop in the Inner Hebrides, you will venture onto the Long Isle, the archipelago where crofting and weaving is a way of life and Gaelic is the mother tongue. Take in the atmosphere of the islands, each of which has its own distinctive feel. North Uist has its golden sands and birdlife, South Uist its 20 mile long shell beach. On Barra, regarded by many as the Outer Hebrides in miniature, you can go ashore and watch planes land on the beach. The Monachs, Berneray and Mingulay are only populated by thousands of sea birds. Taransay, made famous by the BBC reality TV show, Castaway, is a fabulous stop on the west side of Harris. Explore the chapel remains and spot wild deer while walking the sands. Enjoy the views of the North Harris Mountains as you go ashore at Luskentyre beach to witness the many miles of white sands separated by sand dunes and blue turquoise seas. In a vast cruising area, where itineraries vary according to wind direction and tide, every trip is special. 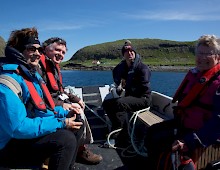 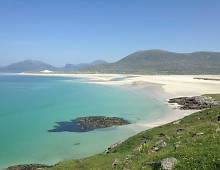 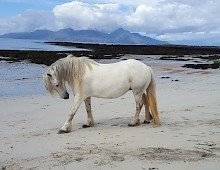 A wonderful week on Glen Tarsan. Full credit to the crew who made it a fun and relaxing experience, and to my fellow guests who were such good company. It goes without saying that the food, scenery, shore trips were all excellent. It's hard to pick a particular highlight but as a single traveller I really appreciate the fact that I paid the same as everyone else and got the same accommodation. Generally it is a matter of paying a lot more and getting the worst room/cabin! An ideal holiday for the single person. I will be back.